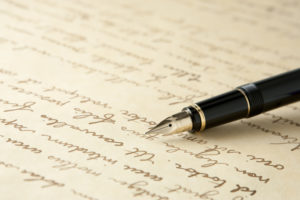 Send a Letter to Your Leader

At some future point, the Church will join the rest of modern society and establish state-of-the-art protections for interviewing our children. In the meantime, parents should not wait. Take action. Send a letter to your bishop to set safe & healthy boundaries.

Below are three templates. Feel free to copy, paste or modify any one of them to fit your situation. Be sure to discuss with your children. After all, they may be the ones on the front line to assure that no on-on-one interviews take place.

Please share the results of your letter on the Success Stories page.

Our family has decided to set the following boundaries with regards to our children.

These limits have been discussed with our kids. We and they fully expect that these boundaries will be respected.

Please let us know if you have any questions.

This decision does not diminish our esteem for you as our bishop. We appreciate and thank you for your dedicated service.

I wanted to reach out to you regarding my children. You no doubt have heard about the recent campaign to change the way our youth are interviewed.  I assure you, we do not have an inkling of nefarious deeds taking place in our ward.  It is our effort to teach our kids appropriate boundaries and direct topics of conversation.  _______ and I have decided to set some boundaries with regards to our children.

These limits have been discussed with our kids. We and they fully expect that these boundaries will be respected. Please make this known that this is our family policy and this is to be followed by future leaders as well.

With love and appreciation,

You may have read in the news that there are a growing number of people both inside and outside of the church who are voicing concern about the policy which allows private one-on-one worthiness interviews between children and bishops. These interviews include explicit questions about sexual themes and there is concern that this arrangement is a setup for two major kinds of abuses. The largest movement, under the heading of ProtectLDSChildren.org, recently delivered over 50,000 signatures of support to the brethren at the Church office building calling for policies to be updated to safeguard our kids.

Changes to policy can take time, but I would like to discuss what we can do now to protect our children in keeping with our parental charge to love and care for our children. I would preface this with a brief synopsis of the sort of harm we are wanting to avoid.

The first and most obvious sort of abuse which has been facilitated by the private and isolated nature of these interviews is sexual assault, pedophilia and rape. This is called overt abuse. It is understood that most Bishops are not predators, just as most scout leaders and most Catholic priests are not predators. However, in Scouting and in the Catholic church, they learned by hard experience that predators exploit permissive policies to prey upon the vulnerable. In our church, the same is true of those Bishops who have been discovered to have abused children in this manner – the existing policies facilitated their abuse. Just as Scouts and Catholics revised their policies to safeguard against predators, LDS church policies require revision.

The second form of abuse which results from these interviews is harder to identify, however is much more prevalent. This is called covert abuse.

Imagine a parent chastising a toddler every-time she stumbles while learning to walk – telling the child that they are wicked, weak and worthless at every misstep. We could see this as a form of verbal and emotional abuse – even though the parents may be well meaning in their attempts to help the child get command of their ability to walk. The child would internalize the message of failure and worthlessness and it would shape how the child viewed herself and her worth. It is a fact that everyone who ever learned to walk stumbled along the way, and those stumbles were part of the normal development of the child – but the child would not understand that reality. They would imagine that they were the only ones who kept stumbling as they developed and it would cause a form of dissociation which results in a hatred of themselves and a sense of worthlessness which is harmful.

This is the reality faced by many youth who are navigating puberty and are faced with leaders who demonize aspects of normal human sexual development under the heading of sexual purity. These leaders may be well meaning but they are untrained and ignorant of normal human sexual development or the traumatic psychological effects of inappropriate shaming.

Just as the obvious sort of verbal and emotional abuse may lead to a life of self-loathing, insecurity, depression, self harm or anxiety and dysfunction – covert sexual abuse resulting from these interviews can be just as destructive.

My wife or I will be present in all interviews, whether with you or one of your counselors. Even if an interview is to be brief, one of us must be present. This includes formal interviews (such as at birthdays) or informal (such as a quick pulling in from the hall for a class presidency re-arrangement).

If in the event one of my children requests a meeting with you and also requests that someone other than me or my wife be present, we will allow them to choose who should be present (such as a counselor, or YW president or advisor, etc.)

Explicit questions about moral worthiness will not be asked to my children. The very nature of determining “worthiness” insinuates that a child may be unworthy. My children are good kids and I know that God loves them. Even if they do make mistakes, as we all do in life, I do not want them to ever feel that they are unworthy before God. They are always worthy of his love, no matter what. My wife and I, as parents, can help them with the repentance process and to accompany them to visit with you if that is needed.

Children are not under covenant to obey the Law of Chastity. That is a temple covenant. We will discuss chastity in our home with our children. What it means, and how it relates to them. However, I do not want them being asked by an adult man if they are sexually pure. I believe that this type of questioning could possibly play a role in a child at some future point being groomed by other adults (whose intentions are evil) if the child feels that it’s OK to discuss sexual topics with an adult man. Now, maybe you never would ask these explicit questions. But there are plenty of Bishops out there who do. And it is damaging. It is damaging to a child’s sense of worth, and it could be damaging to their sexual development that could cause relationship and mental health issues both in the present and later in life. It is damaging that a child may develop a sense that they are not worthy of God’s love, as was the case for me during my teenage years.

With love and appreciation,